Hello Grete
I have attached some photos of CH. Great Earl of Duke v. Adhem.  Earl is his nickname.  He is the son of CH. Caesar from Balihara Ranch (Duke).  Duke’s father was CH. Dyck v.d Gansewiesen and CH. Gina v. Garstnaeck.  Earl comes from a long line of Champion dogs!  I also attached a recent video of Earl doing agility at the big December 2010 AKC Invitational in California.  I hope you can open them all.

It is hard to believe it has been just over a year since Duke has died.  It is difficult to lose a very special dog like him.  I was fortunate to have a wonderful dog like Duke in my life.  I have attached a photo of Duke and I from several years ago.  I am also grateful to have one of Duke’s puppies to carry on a great Entlebucher line.  Thank you to both of you!
Enjoy!
Keep in touch.
Happy New Year!
J. S. 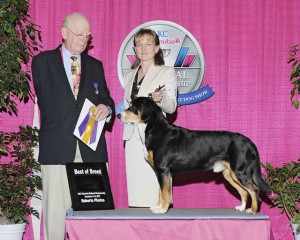