Kenzo was an extraordinary dog who lived a remarkable life. Born in Slovakia his early years were spent in the south of France where he quickly acclimatized to the hot summers by swimming in the pool of our house or basking in the nearby stream. As a family we spent a great deal of time exploring the region; walking in the hills or visiting the many beaches. Full of energy, Kenzo would run amongst the ancient olive groves, attempt to dig out “truffles” (without much success) and plunge into rivers in pursuit of the sticks we threw for him.

Our lives, particularly in the summer were dominated by the need to avoid the intense heat. We would walk early in the morning or late at night and many a time I would follow to see Kenzo standing dead in his tracks surveying the sangliers or wild boar crossing our path. He never pursued them, always showing utmost consideration and respect for animals both large and small. When years later we moved to Shropshire, he acquainted himself with a pure white deer that lived near the house. Kenzo would stay still, dazzled by its unearthly brightness, watching until it trotted away.

He loved to frolic in the Mediterranean and thrived on the rich experiences found at the beach; be it enticing smells of recently consumed or abandoned food (he was always a bit of a glutton!) wrestling with chunks of seaweed or cavorting with other dogs. Likewise on our trips to the Alps he went berserk in the snow; digging huge craters, trying to outrun children on toboggans and chasing snow balls.

When things got hot we gave him ice cubes which he buryied in the garden only to wonder when they had disappeared a day later. He was a fearless dog. Nothing fazed him. He took a great liking to water from

an early age. He tried to “herd” my children in the swimming pool, running around in endless circles before finally giving up and throwing himself in with an enormous splash.

Kenzo was always such fun. He touched our lives daily with his zest and enthusiasm for life and kept us constantly entertained with his wonderful sense of humour. He seemed to be aware of his ability to make

us laugh. In French they say “fait le clown”; to play the clown. The phrase summed him up and of course all the French warmed to him because of it.

He was a very popular and sociable dog and had a lively band of friends and followers both human and canine outside the school my children attended. He announced their exit from the school gates with howls of delight and copious amounts of jumping up, a response that we never quite got the better of, despite intensive training. When Kenzo was happy he was straight-up in showing it, effusive and quite frankly noisy. He was a true extrovert.

Kenzo did well on the French show circuit. Perhaps because of his outgoing and friendly nature, he was popular with the judges. But he was also a good looking dog showing the typical stocky build of a working Entlebucher. He won lots of trophies and was awarded best of his breed in France for 2002. But standing around with cups and rosettes was never his favourite pastime. He loved to retrieve tennis balls. He had a huge collection of them in his “toy box” and would always scurry off to choose a favourite, usually one which had been stripped of its furry covering on the word “Ball!”

He was exceedingly strong for his size and would dislodge huge logs found in rivers almost twice his size hauling them up the slippery banks to present at my feet. He also loved agility. He was accurate and fast and totally without fear. His early attempts on the A Frame saw him hurtling up and down it with a breathtaking speed close to recklessness.

Kenzo had a soft and sensitive side to his nature which became more apparent as he aged and as our fortunes changed as a family. He sired one litter with our French girl Chloe. As his puppies grew bigger and more playful, Kenzo showed amazing gentleness and tolerance towards his offspring who frequently ambushed him en masse to chew and snag themselves onto all parts of his anatomy. He was always kind and fair.

In the UK, he lived in our house alongside other dogs and an array of family pets. My younger daughter had rabbits which often came into the house. A particularly feisty one; Barney, would often have a go at him, but Kenzo ignored him, pottering off in an unassuming way rather than taking up the gauntlet. He was similarly careful with our baby cockatiels who were handreared in the kitchen, even letting them perch on his head for short periods of time! He was a true farm dog and lived peacefully alongside all our other animals.

He sensed when things were not right with people. As my career as a teacher took off, Kenzo accompanied me to a local agricultural college where I taught Special Needs. Kenzo took the unpredictable natures of my autistic students in his stride letting them stroke and groom him without batting an eyelid.

As our fortunes changed and things became tough at home, Kenzo comforted all of us at times. He hated discord and raised voices, and when people cried he became anxious. When the chips were down he placed his head on your lap as a sign of solidarity as if to say “ I am your friend…I am always here”. In times of need he was a truly compassionate caring friend who never gave up on you. I owe a lot to Kenzo for my sanity during what were very difficult years.

As time passed, mine and Kenzo’s life became inextricably interwoven. He slept beside me on the bedroom floor, and waited for me to return from work. His gaze constantly fell on me, anticipating my every move. He would wait patiently for hours whilst I painted at my easel and sat at my feet whilst I sketched outdoors in the rain. He was incredibly perceptive and always knew when I was close to completing a task. Before I knew I had finished a painting, Kenzo would nudge my palette as if to say “It’s done!”. He moved to his favourite spot near the front door when my daughters were on their way home from a night out. He was the keeper of time.

Kenzo I am quite sure would have laid down his life for us. He once stood in front of a huge piece of approaching farm machinery in the yard of the farmhouse where we lived in Shropshire. Myself and my daughters were some distance behind him but in

his mind this machine was evil and there was no way it was going to reach us. In the end I had to lead Kenzo away in a frenzy of barking to prevent it from engulfing him. Later when we moved to a modern housing estate Kenzo developed other relationships with our visitors. He was cautious of the rag and bone man who frequented our street, tormented the piano teacher on his insistence for sitting under the piano on the pedals and for some reason used to howl and “sing” when the ice cream man tinkled his tune on summer days. He was a fantastic guard dog and alerted my neighbours to a break in as intruders struggled in the passage way between our houses to force their kitchen door.

As my work commitments increased, Kenzo often spent short breaks with my parents. With them he indulged his time alongside my Mum at WI meetings, Arts and Crafts and with my Dad at the local Bridge Club. This gentle lapse into retirement not surprisingly suited him. He was less up for long walks and he thoroughly enjoyed the attention and copious biscuits that he got on his social visits.

His last few months were spent with our new Swissie Anka. It was a tough decision to bring a new pup into the household during Kenzo’s twilight years, but it is one I never regretted. From the start Kenzo adored Anka and loved to play and chase around the garden with her. I am sure he forgot his years and literally found a new lease of life in her. Recent visits to Cornwall afforded him his old ways of foraging on the beach, hoovering up discarded chips on the sea front and paddling in the sea. It was on one of these occasions, on a windy day in October, that he stood on a cliff at St Ives and looked to the horizon. I knew then that soon I would lose my companion. I will capture that moment forever; my soft, strong beautiful dog. 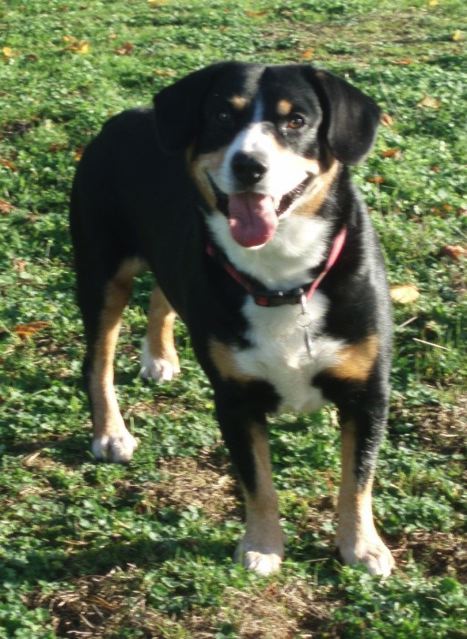 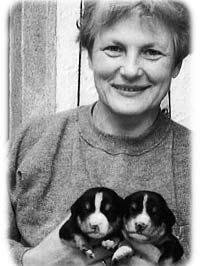